Zombie Prom is a campy tale of teen angst set in the nuclear 1950’s.  The soundtrack has its roots in the 50’s but the playing style on the cast recording has a modern flair.  For the first time I was able to focus on more core kit and had very few extra curricular activities to worry about in terms of percussion and special effects.

I used a full, but a slightly smaller kit, than  In The Heights.  Read on for all the details!

I wasn’t sure if I’d be responsible for any of the special effects during the show – nuclear power plant explosions, civil alert sirens, whip cracks, etc.  Luckily, most of those were handled by the sound crew, leaving me with Mrs. Strict’s whip cracks, Jon’s ratchet head turn and a bright bell tone used in the dance number Exposé.

I used MainStage to host the effects samples and triggered them with a BT-1 trigger.  I found a good set of whip samples on iStock Photo for $4.00 and used them to create a custom EXS-24 sampler instrument:

I found a good ratchet in the TD-30 (patch #1041) and for the bell tone in Exposé, I doubled the TD-30’s built-in Crotale patch (#942) with a Tibetan Bell sample from the Vir2 World Impact : Global Percussion library:

As usual, I started my setup by listening to the cast recording and searching the TD-30 default kits for a good staring point.  I really wanted an authentically retro snare drum sound and I found it in the Overhead kit (#13) with its Solid Maple snare patch (#166).

My first step was to rearrange the toms since many kits on the TD-30 run Tom 2 – Tom 5.  I wanted a higher register sound, so I shifted to Tom 1 – Tom 4 on my four toms and upped the damping to “Felt1” as before.

In addition to the “retro” maple snare, Zombie Prom has a few “march” segments that called for a tighter concert snare.  I chose the Custom Wood patch (#172) to fill that role.  I also used a tuned up version of the Custom Wood snare for the “snares off” rhumba beat in Exposé. 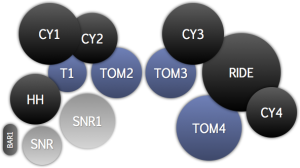 I liked the feel of my In The Heights kit with three toms across the front.  It gives the kit a more ergonomic feel, reducing twisting and turning and allowing more focus on the conductor (they tend to like that, go figure).  So, I kept that configuration for Zombie Prom.

The tables below list the various TD-30 instruments that were assigned to each trigger for this show.  Although much simpler than past shows, I still ran 31 program changes to change special effects, add and remove cross-stick sounds on my snare, and rotate a couple of different snare drums and percussion instruments.