UPDATE : I’ve posted YAGT (Yet Another Goddamn Transcription) of this solo snippet.  Even though I watched Paul play this up close and personal, I don’t think I had it quite right.  Please visit Turn signal, re-revisited to see the latest.

I was lucky to have time to ask Paul about my transcriptions at his guitar retreat.  The first one up was Everybody Use Your Goddamn Turn Signal. I quickly learned that I was not correctly accounting for Paul’s insane reach and dexterity.

Continue reading to see what I learned and how it applies to this lick.

The main thing I saw watching him play was a transition from the 80’s-era Intense Rock VHS tapes showing 3-note-per-string licks to 4-note-per-string territory.  This is ironic, since I just posted a transcription for Bill Connor’s Add Eleven and was discussing this very same technique.

Paul’s application is applied to the blues scale, in the case here of Everybody Use Your Goddamn Turn Signal, the Major Blues scale.

The quickest way to try this out is to move your familiar Minor Blues shape down 3 frets and play it again.  It is now the Major Blues scale for the same root.

As Applied by Paul

Next, we’ll add a pick-up note and start with an upstroke to keep our picking in order:

Next, we’ll unlock the lower octaves by inserting a repeating note pattern that switches fingerings.  Noteice the triplet in beat 3 of the second measure – it is the same set of notes as beat 2, but we’ve moved into a wide stretch to play this 3-notes-per-string.  This is a fast way to descend and will be helpful to set up a position shift in the next example.

Finally, we’ll connect to the same pattern an octave below with a quick position shift from 12th to 9th position.

Once you have the exercises above under your fingers, you should be ready to tackle the Everybody Use Your Goddamn Turn Signal lick below (in the key of F#).  Start slow and build up speed! 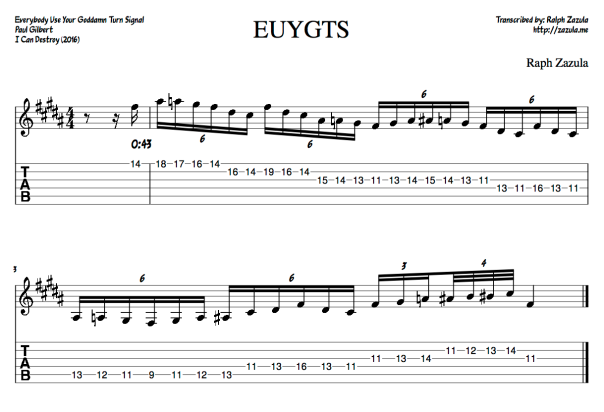 Everybody Use Your Goddamn Turn Signal V2 (PDF)